She may be only 21 but reality TV star Kylie Jenner already seems to be looking ahead to the time when reality TV loses it flavor with the masses and turns many of its stars into ‘has beens’. With a successful stable of cosmetic and eyebrow products already on the racetrack, she’s been teasing fans for several months about her next venture. Her legion of followers on Instagram though may have had the benefit of an early hint. Back in March she posted a bare faced photo of herself simply titled ‘skin’. Those who immediately guessed there was probably going to be a Kylie Jenner Skin Care line guessed right. The world was indeed about to get yet another celebrity skincare line! Then again, skincare and cosmetics do go together in most people’s minds, including Kylie’s, so it probably wasn’t that hard to figure out what was coming next! 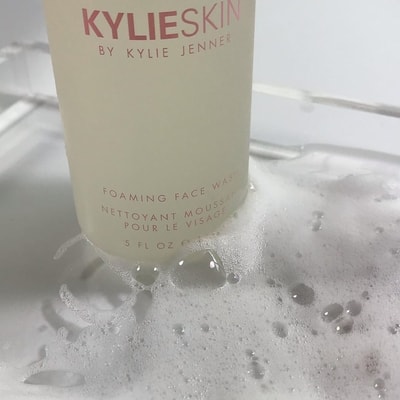 So what do we know about KylieSkin products?

According to the youthful cosmetics entrepreneur they’re “cruelty free, vegan, gluten free, paraben and sulfate-free and suitable for all skin types”. That’s a pretty commendable list of accolades! We also know that millennial pink is involved and why not. Her sister painted an entire wall in a similar colour for its reputed ‘calming’ benefits, and Kylie herself at 21 is only just out of that generation. Moreover, not every generation can boast of having its own color! Therefore, although some sources gleefully declared millennial pink to be dead in the water last year, its soothing classy vibes don’t seem quite ready to disappear yet, or at least not if Kylie Skin has anything to do with it.

In fact, could KylieSkin become the new icon for all things pink? It certainly seems that way!

The first ‘officially launched’ product is a foaming face wash with understated sans serif rose gold lettering on the bottle. The other, in a pink tube, was displayed in an Instagram promo video. The backgrounds of the @KylieSkin IG page and in much of the PR material we’ve seen so far are also pink. Incidentally, just in case you’re wondering – rose gold is a metal that’s popular for jewellery. It’s a mixture of ‘normal’ yellow gold, copper, and silver. The pink hue is produced by the blend of copper and silver.

We can also surmise that KylieSkin products will be ethical and presumably sustainably produced as well. Therefore, vegans and anyone concerned with such issues can probably rest assured they won’t be violating any deeply held principles in using KylieSkin products. Unfortunately though the ingredients lists were not available at the time of unveiling, which may turn out to be an unfortunate miscalculation. The company did however respond to requests for the information by advising that publication of the recipes was in the pipeline.

And Suitable For All Skin Types

If you’re also worried about missing out because the products don’t work with your skin type, don’t be. Kylie assures us they’ve been carefully created to suit every skin type. They’re the ‘best of the best’, fostered by her newfound knowledge of all things skin care related learned during the development of her cosmetics business. 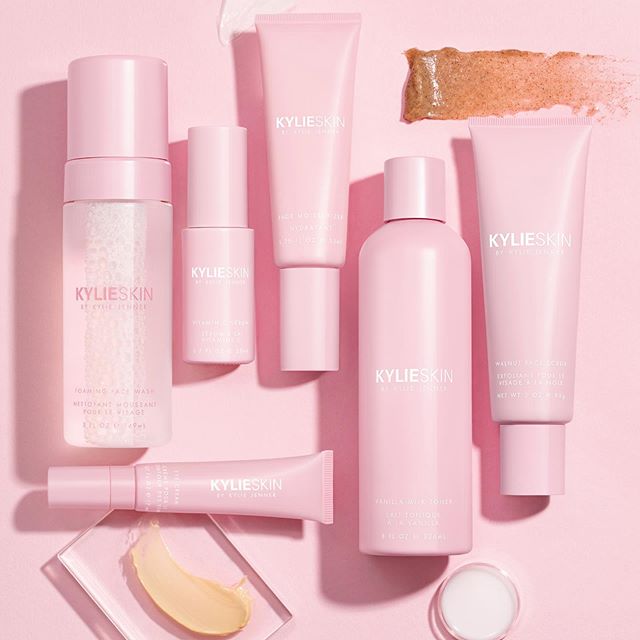 Officially, the launching date for KylieSkin products is May 22nd. However, Sunday the 12th of May was Mother’s Day in many countries, including the US. In a clever marketing ploy, Kylie clearly figured it was also an ideal day to reveal the rest of her inaugural ‘skin set’. After teasing fans for several days with the initial announcement about the skincare line, followed by a brief glimpse of the first product, 6 pink hued products were officially unveiled on Mother’s Day.

The KylieSkin ‘skin set’ includes the foaming face wash, a face scrub with walnut grit, a vanilla milk toner, a facial moisturizer, a serum with vitamin C, and an eye cream. You’ll be able to buy the entire set for a cool $125 whilst individual items will retail for between $20 and $30 each. The promo material also features a small, unidentified pot that could be a lip balm in the making but time will tell.

Kylie Jenner skin care products will also come with the branding ‘It starts with skin.’ Perfectly true but not particularly innovative all the same. However, it’s undoubtedly more about the connotations of the phrase, the ‘deep and meaningful’ aspects of it rather than its originality. There are many ways we can interpret those 4 simple words. A good skin care routine for example is something many of us regrettably lack and we inevitably have the skin to show for it too!

Given that skin is one of the first things to show our age, a good anti aging regime should ‘start with skin’ care. Facialists and skin care experts will also tell you that cosmetics are much easier to apply to good skin. Good skin is proven to boost self-esteem and mood. It also protects our internal organs from the outside world, keeps them tucked away where they’re supposed to be, and helps regulate body temperature. It deflects harmful UV rays and produces vitamin D. Etcetera. Without skin we wouldn’t ‘be’, something Kylie clearly understands!

We clearly understand this too! Whilst Kylie’s products will undoubtedly appeal to millions of teens and even millennials (it’s probably the pink) there are other older generations interested in skin care too. Furthermore, today’s teens won’t be teens forever either and when they leave their fresh plump youthful teenaged skin behind, they’ll probably be looking for a first class wrinkle reducer!