This article tries to help you establishing a Skin Care Routine for Acne. Life can be difficult for people who suffer from acne. It is not easy to hide your face from the world. Many people experience depression, low self-esteem, and lack confidence due to their acne. It can hinder their dating experiences, job promotions, and overall self worth. In a society that is very self-conscious and body-image obsessed, many acne suffers feel lost and inadequate. The joy of feeling good about who they are is snatched away with every breakout. The anxiety and fear of what others may think of them drives many suffers to withdraw. What can be done about acne? How can an individual who suffers from acne regain their life back?

Acne is a common skin condition that produces pimples on the face and upper torso.  It is caused by the interaction between hormones, skin oils and bacteria that result to the inflammation of hair follicles.  A pimple grows when the follicle of a skin gland clogs up, blocking the oily substance known as sebum from leaving through the pores.

This condition does not exclude anyone by reason of race, age or racial position.  While most common in teenagers and young adults, people in their forties and fifties still get acne.  It mostly occurs on the face, upper chest, shoulders and back and is often characterized by pimples, cysts and abscesses.  Acne is not considered a serious health threat but may affect the confidence of an individual in his/her appearance due to the unsightly inflammation and the scars it leaves.

The exact cause of acne is unknown although there are certain factors that are believed to cause it. The most often mentioned are conditions that involve hormonal changes such as puberty, pregnancy, menstrual periods and starting or stopping the use of birth control pills.  The use of certain drugs particularly corticosteroids and anabolic steroids can also cause acne as they stimulate the sebaceous glands. Certain types of cosmetics may worsen the condition if they clog the pores. Heredity also appears to play a role in the development of acne.

Acne vulgaris is the most common form of acne, and is simply what we refer to as common acne. Acne vulgaris can affect anyone, and almost 100% of the population has had acne vulgaris at one time. Over 85% of teens suffer from acne, and although it is caused by an increase in hormone levels which affect and over-stimulate the sebaceous glands, the resulting acne is still called acne vulgaris.

Acne vulgaris is usually found on the face and upper body area including the back, chest, neck and arms. Both facial acne and body acne are considered acne vulgaris. In most cases, acne vulgaris will not cause scarring.

Acne that scars is usually much more severe, when several papules or pimples join together causing cysts (known as cystic acne or severe acne). Acne vulgaris affects people of all ages, though it is mostly predominant in teenagers. 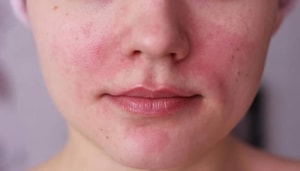 Acne rosacea is similar to acne vulgaris, but is accompanied by red patches on the skin, spider veins, red cysts and sometimes a reddish tint in the eyes. Acne rosacea is incurable and can flare up at any time, though there are acne rosacea treatment options to minimize flare-ups and symptoms.

Acne rosacea mostly affects people with fair skin, and is predominantly found in people of English or Scottish descent. The exact trigger for what causes acne rosacea is not entirely known.

There are many different ‘real time’ skin care routines for acne as well as many proactive acne treatments. Each treatment can be used exclusively or some can be combined with other methods to completely eliminate acne.

Early treatment is considered the best way of preventing scars. The doctor can prescribe over-the-counter prescription drugs which can be taken orally or directly applied on the skin.

General care of acne is relatively simple. The affected areas should be washed gently once or twice a day with a mild soap or cleanser. Heavy, frequent scrubbing or the use of anti-bacterial or abrasive soaps or alcohol pads does not stop acne and may only serve to further irritate the skin.  Frequent touching of the affected area especially when accompanied by squeezing, pinching or picking can produce scars or dark spots on the skin.

Water-based cosmetics are preferred over greasy products that have been proven to worsen acne.  Even if there are no restrictions on specific foods such as chocolate, a healthy and balanced diet would always be beneficial not only to the skin but to the over-all well being of a person.  Many acne drugs can make people more likely to sunburn thus it is best to avoid direct exposure to the sun as much as possible.

Mild acne can be treated with topical drugs that work by either killing the bacteria or drying up or unclogging the pores. The antibiotics Clindamycin and Erythromycin are the two most commonly prescribed antibacterial. Another effective antibacterial which can be obtained with or without a prescription – as mentioned before – is Benzoyl Peroxide. In case topical antibacterial fail to control acne, doctors may use other topical prescription drugs that would work to unclog the pores.

One of the most effective is Tretinoin but it can irritate the skin and make it more sensitive to sunlight. Drugs of this type should be used with caution, starting with low concentration and infrequent applications which can be gradually increased as needed.  However, Benzoyl Peroxide and Tretinoin should never be applied together as the former inactivates the latter.  More recently developed drugs that have the same effects as Tretinoin are Adapalene, Azelaic Acid and Tazarotene.

Blackheads and whiteheads can be removed by a doctor.  A sterile needle is often used to open a large pimple while other instruments can be used to drain clogged pores and pimples.  Severe acne may require the use of oral antibiotics such as Tetracycline, Doxycycline, Minocycline and Erythromycin.  These drugs have potentially serious side effects thus it is important that it be taken only under the supervision of a doctor.

The most severe acne may be treated with oral Isotretinoin when antibiotics fail to correct the condition.  However, this drug should be strictly regulated as its use can harm a developing fetus.  Women are required to take strict contraceptive measures so as not to become pregnant while under this specific treatment.

Acne treatments for specific conditions such as those with worsening acne during menstrual periods are being used.  In this case, oral contraceptives are advised to be used by the patient.  This kind of treatment usually produces results within two to four months.

Doctors sometimes inject Corticosteroids into large, inflamed nodules or abscesses.  Some cases would require the doctor to cut the nodule or abscesses open to drain it.  Suitable treatment of acne scars would depend on the shape, depth and location of the scars. The most commonly used procedures include chemical peels, laser resurfacing and dermabrasion.

Chemical Peel – the use of a chemical or acid to remove the top layer of the skin.

Dermabrasion – a procedure in which the skin surface is rubbed with an abrasive metal instrument to remove the top layer.

Laser – a device that produces a thin but very intense beam of light that has one particular wavelength.