The Julianne Moore skin care routine: Her mother hailed from Scotland, which is very likely where talented actress Julianne Moore gets her beautiful porcelain skin and red tresses from. The star of 62 (and counting) feature films plus a number of television series and movies, turns 57 at the end of this year but you’d never know it by looking at her youthful complexion!

Julianne’s skin care secrets are, surprisingly given her flawless skin, very simple and basic.  She always uses facial oil, followed by sunscreen.  For extra moisture if required she uses a facial cream layered with the face oil. She also drinks plenty of water, including at least one glass with a tablespoon of chlorophyll added.  Plus she stays out of the sun as much as possible.

Another part of her daily skin care routine is using buff washcloths to clean her face daily. This helps to exfoliate her skin without having to use expensive exfoliation lotions.

Julianne is not a big fan of noisy workouts or popular activities like spinning, preferring instead to do yoga and workout from home. In addition to a lot of walking, she does a bit of light weight lifting as well as interval running. All of which pays off because she certainly keeps herself looking trim and fit. One thing she won’t do these days, after having made herself quite ill in the past doing it, is change her body to suit movie roles. 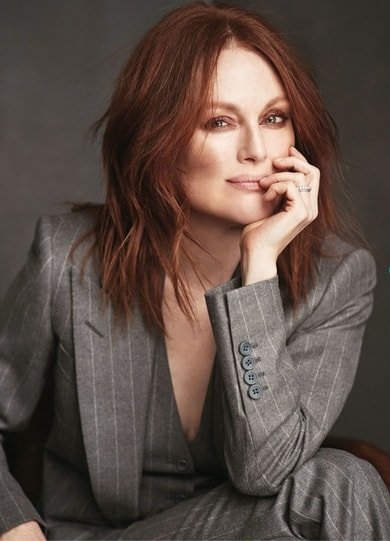 When it comes to diet, Julianne is nothing if not health conscious here too. She tries to avoid eating too much sodium as she says she can see it in her skin the next day. In general she tends to stick to a low carb diet, with plenty of fish rather than red meat. She also prefers to get a lot of her protein through salads.  Bread is generally off the menu too as is sugar.

Does the Julianne Moore Skin Care Regimen include Argan Oil?

Well … we assume it does as more and more people are getting on the argan oil bandwagon, and these people are looking for good sources of 100% raw organic argan oil, and for good reason!

Argan Oil – Ethical, Sustainable, Or A Bit Of Both?

Are you interested in ethical, and ethically sourced, products? You may be tempted to assume that all those products declaring themselves ‘sustainable’ are the same thing but in reality there is a difference.

‘Sustainable’ and ‘sustainable production’ refers to products and production methods that can be maintained at a particular level or rate, or can be defended or upheld. Therefore, if you see that something has been ‘sustainably produced’ it generally means the product or technology has been produced with ‘minimal exploitation’ of the environment, animals, or humans. Production of those products can be sustained without depleting natural resources or interfering with the ecological balance.

‘Ethical’ and ‘ethical production’ is more about something being ‘morally right’ and acceptable ie does the way a product is produced from start to finish conform to a set of moral standards, or conform to your belief about what is right and wrong? For most people, the majority of ‘sustainably produced’ products are likely also ‘ethically produced’ because the way they’ve been produced complies with that person’s beliefs about such things. However, those who have very strict beliefs about what is and isn’t ethical are also going to have a very narrow perception of what is and isn’t sustainable!

The Berber people, typically the women, of what is now Morocco have produced Argan Oil for over 3,500 years. The processes they use are rooted in antiquity and had changed very little until the rest of the world discovered the value of the oil towards the end of last century. For example, it was reportedly common to allow Tamri, or Moroccan Mountain Goats, to climb into the trees to eat the fleshy fruit.

The seedpods passed through their digestive system intact and were gathered up for processing. The ones that were missed subsequently germinated to produce the next generation of trees. Alternatively, the fruits were either picked up from the ground after they dropped or harvested from the trees by hand. They were then sun dried and the seedpods extracted from the dried flesh.

These days goats are not allowed anywhere near trees that are used to produce Argan oil! So, whilst you can rest assured your Argan Oil skin or hair care product has never seen the insides of one, the policy has nevertheless removed one of the natural reseeding processes by which the trees were able to regenerate.

Overall, Argan Oil processing is still very much a manual process. Some producers now have machines that can extract the seedpods from the flesh without the need to dry the fruit first and some also have mechanical presses. However, many producers still do things the traditional way from start to finish, and therein lies one of the reasons Argan Oil is still considered ‘rare’. Other reasons include the conservation status of the tree itself, and the fact that it takes 30 – 50 years for a tree to mature to fruiting stage.

Like collecting the fruit, extracting the oil rich kernels from the seedpods is still a manual process. The seedpods are carefully crushed between 2 stones to allow for extraction of the undamaged kernels. Kernels intended for use in culinary Argan Oil are then roasted before being ground (manually) into a paste and kneaded to extract the oil. Kernels for cosmetic Argan Oil are not roasted but are ground raw before being subjected to the same oil extracting kneading process. The oil is then decanted and filtered. These days, mechanization of the grinding and the use of cold presses to extract the oil not only reduces processing time by several days but also produces higher-grade oil, and more of it. However, it’s still possible to find people doing it the traditional way.

When Argan Oil came to the attention of the cosmetics industry in the early 1990’s, there was a push to mechanize as much of the process as possible to speed up extraction, increase yields, and theoretically improve the quality of the oil. Commercial producers built processing facilities in Casablanca and proceeded to monopolize production. The impact on the Berber people, who had traditionally relied on the income they made from selling their oil, was so significant that it prompted the German Government Development Agency (GIZ) to take a look at their plight. What they found was that, although the commercial producers claimed Berber women were still very much involved in the process, the reality was rather different. The women had in fact been marginalized and received very few benefits from the rising sales of Argan Oil. An added problem was the loss of quality control over the end product as commercial producers often diluted the oil.

In the mid 1990’s the German Federal Ministry for Economic Cooperation and Development and the GIZ got together with Moroccan authorities to come up with a plan to move the production of Argan Oil back to its traditional roots with the Berber people. A series of Fair Trade co-ops were established to facilitate the process and also protect the women from exploitation. Working conditions for them included flexible working arrangements and competitive wages along with education and health opportunities for them and their families. At the same time arrangements were put in place to ensure the tree themselves were taken care of.

Argania spinosa, AKA the Argania tree, is the sole species in the genus Argania, a member of the Angiosperms clade. The tree once grew prolifically over much of northern Africa but over exploitation has caused its habitat to shrink considerably. The last remaining natural forests are all contained within a small area in the Atlas Mountains known as the Arganeraie Biosphere Reserve. The tree itself is on the endangered species list, and the Biosphere is under UNESCO protection. This has allowed authorities to ensure the trees are managed sustainably whilst ensuring the livelihoods of the Berber people are protected. It’s a win win situation that produces Argan Oil in a way that is both sustainable, and ethical.

(The American Academy of Dermatology (AAD) was founded in 1938 to encourage and provide continuing education in dermatology. The Academy sponsors a number of educational events for its membership throughout the year. Educational materials are available for dermatologists, physicians, medical students, allied health professionals, schools, and the public.

At UR Medicine Dermatology we offer the very latest non-surgical cosmetic procedures – provided by a fellowship-trained dermatologist. Receive care that is safe, effective and fully lives up to your expectations.

The Department of Dermatology at the George Washington University is dedicated to excellence in patient care, education, and clinical research. We also believe community education and outreach is an important part of our mission as dermatologists.